RJ Lara - Interim Executive Director
RJ Lara joined The Historic Stanley Home Museum & Education Center as Interim Executive Director in May 2020. Tasked with leading the institution through its opening and beyond, RJ comes to the Stanley Home from the Winterthur Museum, Garden & Library in Delaware, where he was a Lois F. McNeil Fellow from 2017 to 2019. RJ received his BA from the University of Wyoming, majoring in Secondary Education and History with a minor in Museum Studies. After graduating from UW and working for a six-horse hitch harnessmaker...(read full bio).

The Board of Directors of The Historic Stanley Home Foundation

JoAnn Batey, President/CEO
JoAnn has been co-owner and Vice President of Intercontinental Bearing Supply Company since its founding in 1981. JoAnn has been a resident of Estes Park since 2012 and has served as President of the Estes Park Newcomers Club, Chair of the Estes Valley Recreation and Park District Seniors Advisory Committee, Vice President of the Meadowdale Hills Property Owners Association, and member of the Estes Valley Recreation and Park District Foundation Board. She was also a part of the successful election campaign to raise funds for Estes Park roads, trails, and emergency communications, as well as the successful campaign to fund the Estes Valley Community Center. JoAnn was also a member of the Community Recycle Committee which was responsible for adding a dedicated glass recycling center for Estes Park residents.

Randy Kampfe, Vice President
Randy worked as an engineer and operations manager for Archer Daniels Midland Company for 41 years. He was the Corporate VP of Corn Processing Operations worldwide at the time of his retirement in 2015. He and his wife Patty had a vacation home in Estes Park since 2008 and then built their retirement home in 2015. He has served on many community and church boards in various leadership roles. Currently he works part-time for Kinley Built. He is the Treasurer of the Rockwood Estates POA and Junior Warden of the Vestry of St. Bartholomew’s Episcopal Church.

Tom Shamburg, Treasurer
Tom practiced as a CPA in both Colorado and Nebraska. He also served over 20 years as the Vice President and CFO of the Lincoln, Nebraska YMCA Association. He and his wife Jan, have owned their home in Estes Park for 15 years and resided here full-time for 5 years. He has served on the Boards of the EPNRC, Newcomers, Stanley Hills HOA and is the Council President of Mt Calvary Lutheran.

Kendra Wallis, Secretary
Kendra worked in the Oil and Gas Industry for 25 years, most recently as Manager of Revenue with Kodiak Oil and Gas in Denver. She and her husband, Kevin, have also flipped houses over the years as a "fun" side-job. In 2014, Kendra joined Keller Williams and began a successful career selling real estate. She and Kevin often rode their motorcycle up to Estes to take in the beautiful Estes scenery. When Kevin took an early-out package from American Airlines in 2017, they quickly sold their house and moved to Estes. Kendra has served on the Estes Park Newcomers Board, and she is an active member of the Sunrise Rotary Club of Estes Park as well as The Wandering Wildlife Society of Estes Park. She is a REALTOR with Keller Williams 1st Realty and is helping people buy and sell homes in the Estes Park and surrounding areas. Kendra and Kevin also own a vending business in Estes Park.

John Forster, Board Member
John is the owner of a propane company and began in the industry 26 years ago with his father. He also has several real estate investments and has a small hobby farm in Fernley, NV. His love for Estes Park began when he and his wife were married here in 2011 by Judge Brown, current owner of the Historic Stanley Home. He is an avid vintage car collector and appreciates the history behind all things motorized. As retirement approaches, he and his wife hope to also be part-time residents of Estes Park.

Lisa Fulton, Board Member
Lisa is currently working as the Director of Operations for real.leads, inc. She served in the Air Force during her early career and has since worked in various technology roles over the past thirty years. Lisa and her husband, Bob, have lived in Estes Park since 2014. Lisa also serves on the Estes Park Newcomers board as Interest Group Coordinator and is a member of the American Legion Post 119 in Estes Park.

Peggy Lynch, Board Member
Peggy is a Colorado Native and has lived in Estes Park since 1985. Peggy, her husband John, and their two sons moved back to Colorado after owning a fishing resort on an island in Minnesota for 15 years. She has been in real estate since 1982, originated Rocky Mountain Realty Co in 1988, then purchased the RE/MAX Mountain Brokers franchise in 1996. This year, Peggy achieved the highest RE/MAX award, the Circle of Legends. She has previously served as the president for the Board of REALTORS® and president of the Estes Park Quota Club. Peggy has also been voted as Philanthropist of the Year for Estes Park. During her time with RE/MAX Mountain Brokers, Peggy was the listing agent for the Stanley Home and can’t imagine this precious gem being sold to a developer or someone that would change the historic character of the home.

Original HSHF Board of Directors 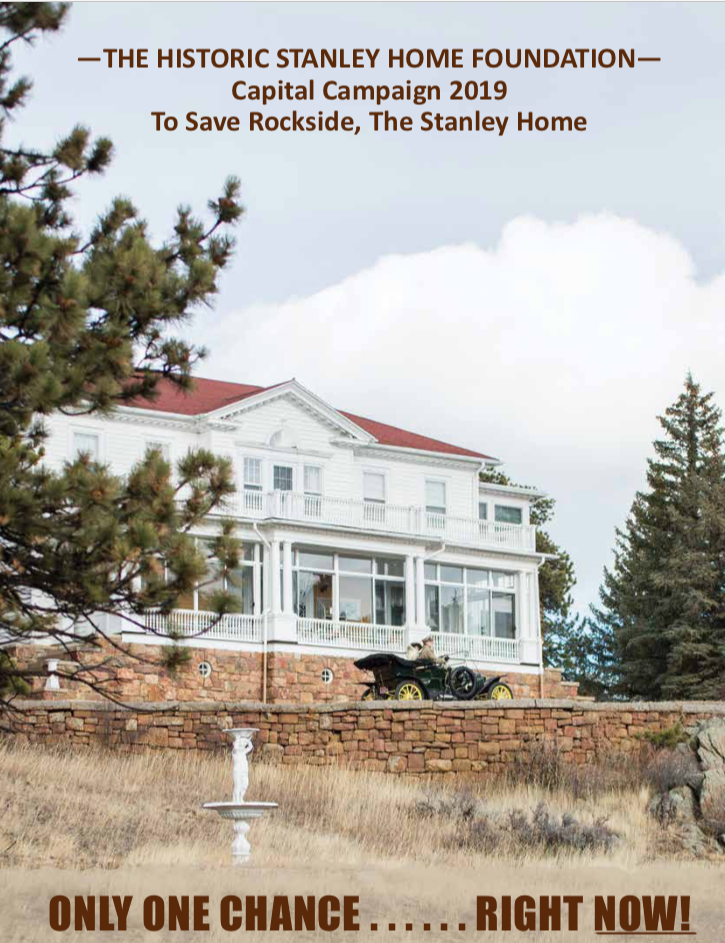 “The day of F.O. Stanley’s arrival was the epoch-making event in the history of the Park.” – Enos A. Mills

The Stanley Home Museum & Education Center strives to educate and inspire diverse audiences by developing a deeper understanding of F.O. and Flora Stanley’s experiences, character, and leadership through the interpretation and preservation of the history, context, and culture of the historic Stanley home. We are currently closed to the public except by appointment only.